From July 30th to August 01st Paques was present at FENASAN in São Paulo - Brazil, exhibiting its technologies to the different market segments. 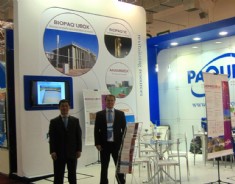 Fenasan is an annual event and one of the most important fairs held in the sanitation sector in Brazil and abroad.

This fair has as main objectives the promotion and diffusion of the technology employed in the environmental sanitation sector as well as the exchange of information, demonstration of products and the development of technological systems used in water treatment and sewage.

Sergio Cruz, Managing Director of Paques Brasil, reports: "Exposing at Fenasan for the third consecutive year, we had a good opportunity to disseminate not only the BIOPAQ®UBOX technology, but other Paques technologies as well. During the event we also focused on THIOPAQ®, ANAMMOX® and BIOPAQ®IC. This fair was the second event we participated in 2014 and we have some interesting project leads. The Brazilian market still doesn´t know all of the technologies Paques can provide and Fenasan 2014 gave us a great opportunity to show them."

This year the fair had 248 exhibit booths of companies of this sector, 19,000 visitors, presentation of 80 technical papers, 8 round tables and 3 short courses. With these numbers, Fenasan 2014 exceeded all expectations and has consolidated its position as the largest technical-marketing event in Latin America.